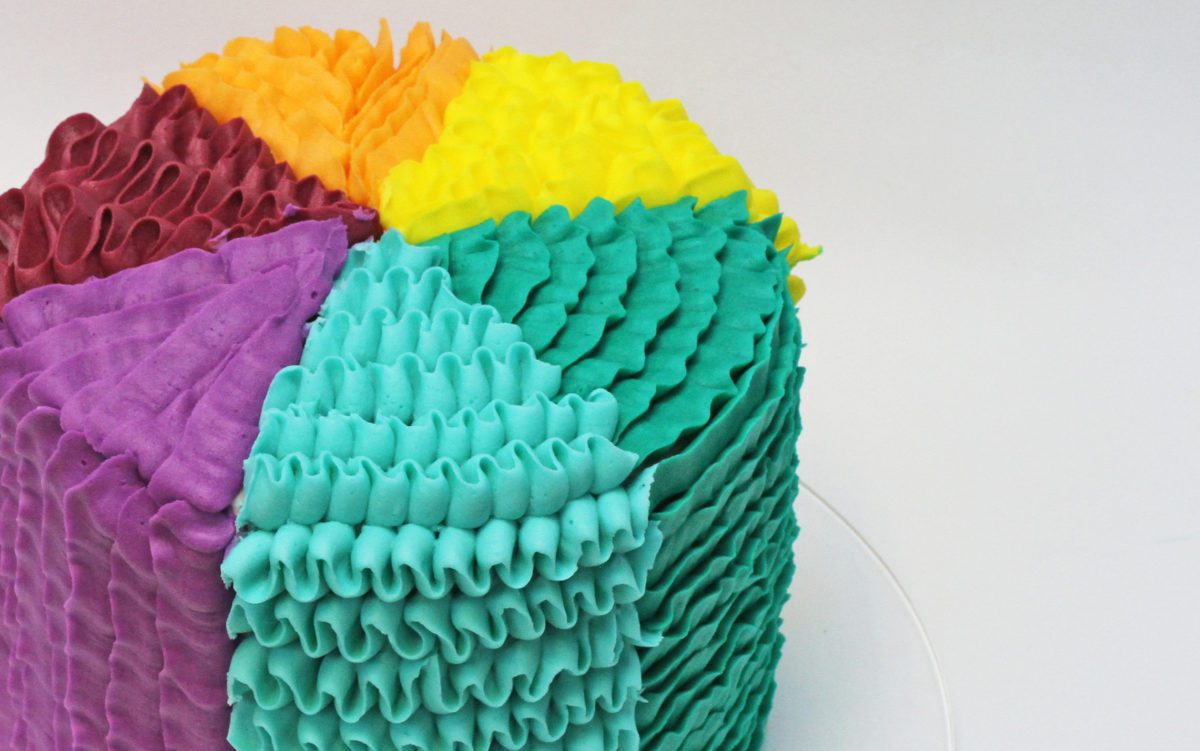 6 Easy Piping Techniques for Frosting Cakes with NO Turntable

I’m going to show you 6 piping techniques to frost a cake with gorgeous texture and you don’t need a turntable for any of these – all you need is a piping bag and a single piping tip! If you prefer to watch a video of this tutorial, scroll to the bottom of the page.

I’ll be using a petal tip for all of these techniques. A petal tip looks like a teardrop with a narrow and a wide end. They come in lots of different sizes – I used a #104 for this 6” cake but for an 8” cake I would use a #125.

To use it, drop it into a piping bag and score a line around the middle of the piping tip with a pair of scissors.

To colour your frosting I recommend using gels, which are more concentrated than liquid colours so you can make really bright and bold colours with just a few drops of colour.

If you’re using several colours of frosting you can prepare them all now if you have several piping tips, or clean the piping tip after each colour and re-use it with the next colour. If you have couplers you can switch the piping tip between different piping bags and I cover that in lots o detail in the module on Piping Bag Basics in my online course on 50 Easy Cake Decorating Techniques for ANY Skill Level.

You’ll need a crumb coated cake and if you’re going to use several textures on the cake, score guidelines into the frosting to divide it into sections for each texture.

This first technique creates rows of ribbons going up the cake. Your petal tip will have a narrow end and a wide end. Hold it with the narrow end pointing away from the cake and the wide end pressed against the cake and rest it down on the cake board. Squeeze the bag to push the frosting out and slowly wiggle the bag upwards and downwards as you pull it gradually away from where you started, around the side of the cake.

Try to make each ribbon the same height as the previous one and hold your bag steady for a split second at the top and bottom of each ribbon to give it time to curve over before you wiggle back down or up. If you like you can score some horizontal lines in the cake to use as guidelines. You don’t have to pipe all the way up to them, but it’s helpful to have a line to focus on as you pipe, so that you can make each ribbon the same distance away from that line.

Press the tip right against the crumb coat so that this frosting has something to cling onto, otherwise it will fall down. If that happens you can scoop it off with a frosting smoother or offset spatula and pipe over that section again. You can use this texture all over the cake, or any of the textures I’m about to show you, or pipe the texture up to the edge of a section of the frosting like I’m doing here.

It’s fine if the line where you start piping isn’t perfectly straight going up the cake – we’ll fix that in a moment. It’s much easier to make the second edge neat, where you finish each piped ribbon.

For the starting edge, use an offset spatula or frosting smoother to scrape off any piping that goes outside of the section you’ve marked off.

For the next section I’m changing colours but using the same petal piping tip, again with the wide end pressed against the cake and the narrow end pointing outwards, wiggling all over this section of the cake in random directions to cover the entire surface.

It’s easiest to start at the bottom on one side and work your way across and up the cake, so that you have the most room to maneuver your hand holding the piping bag. Pipe squiggles going sideways, diagonally, up, and down, keeping the piping close together so that you can’t see the crumb coat of frosting through the piping.

I’m using my 4 Minute Buttercream for this cake but you can use any kind of frosting you like. Make sure you go all the way up to the top of the cake, and I’ll show you how to do the very top in a moment.

Now we’re going to pipe ribbons going up the cake. These ribbons weigh a lot so they really need to stick to the frosting on the side of the cake for support, otherwise they’ll fall down.

So if your crumb coat has set, like mine has, spread some frosting onto the cake just before you pipe these, which will be soft and sticky and act like a glue to attach the piping to the cake. Guidelines are very useful for this technique so you can use an offset spatula or frosting smoother or toothpick to score lines in the frosting to show how wide you want the ribbons to be.

Hold the piping bag down, with the wide end of the tip pressed against the cake, and wiggle the bag back and forth just like you did for the first technique, except going up the cake instead of around it. Pause for a tiny moment at each side of the ribbon before going back in the opposite direction and that allows the ribbon to fold over itself.

Keep the ribbons within the guidelines you scored onto the cake so that they’re all the same width, so they go straight up the cake without leaning to one side. It looks neatest if all of the ribbons finish with the end of the ribbon pointing in the same direction.

This next technique is one of my favorites. Hold the piping bag with the narrow end of the piping tip pointing upwards and sticking above the top of the cake. Squeeze the frosting out and pull the bag slowly across the cake to pipe a ruffle of frosting.

Pipe the next ruffle so that it overlaps the first ruffle, so that the frosting completely covers up the crumb coat and you can’t see any of it in between the ruffles. The more slowly you pipe and the harder you squeeze the piping bag to push the frosting out, the more wavy the top edge of your ruffle will be. You can wiggle your wrist to give the ruffles even more movement.

Here, I’m piping the ruffles horizontally, so that they go across or around the cake, but you can do these in any direction and I’ll show you other options in a minute. Rest the piping tip down on the cake board for the final ruffle to make sure it goes all the way to the bottom of the cake to cover up the crumb coat.

Remember the top of your cake! You can replicate any technique onto the top. For the yellow squiggles I’m doing exactly the same random movements to cover up the top section of the cake. The only difference on top of the cake if you’re piping sections of different textures is that you’re piping onto a pie shaped area instead of a rectangular section on the side of a cake, so you’ll have to make your piping very narrow as you get towards the middle of the cake.

You’ll probably find it much easier to pipe downwards onto a flat surface than onto the upright sides of a cake. The ruffles are very quick to pipe onto the top of the cake, curving each ruffle around to mimic the shape of the outer edge of the cake and overlapping the ruffles to cover up the crumb coat.

Repeat each piping texture onto the top of the cake, starting at the very outer edge of the cake to make sure the texture covers up the entire crumb coat so that you don’t see it sticking out around the top edge of the cake.

If you smudge any of your piping you can use a toothpick to tidy it up, or just scrape that section of piping off the cake and pipe over that area again. If the crumb coat has set before you pipe, it’s very easy to scrape off any messy piping because you won’t damage the crumb coat as you scrape because the crumb coat will be firm and it will hold its shape.

Adjust the texture to fit within the pie shaped sections, for example with these ribbons I’m making each one narrower as I get closer to the middle of the cake and IO’m only piping 3 ruffles on top of the cake, instead of 4 on the side of the cake where there’s more space.

You can go away and do something else and come back to this if you don’t have enough time to do all of the piping at once – it’s fine to do it in stages. For this texture, hold the wide side against the cake and the narrow side should point outwards. That’s ALWAYS how you should pipe with a petal tip, because the frosting comes out easily through the wide end to form a thick line which provides a large surface to stick to the cake, and then it struggles to squeeze through the narrow end of the piping tip and as it squeezes through, the pressure causes it to wiggle and wave and that’s what creates this nice movement in the ruffles.

You can exaggerate it by moving the piping bag, wiggling it slightly back and forth, which happens naturally if you have shaky hands like I do! These ruffles are sticking straight out so it’s important to pipe them close together if you don’t want to see the crumb coat in between them.

To pipe these onto the top of the cake it’s easier to pipe from the middle of the cake towards the outer edge of the cake, so you have a more room to swipe the piping bag away at the end of each ruffle.

If you cut the holes in the end of your piping bags too big, the pressure on the frosting as you squeeze the piping bag you can push the piping tip right out! If that happens, scrape that section of piping off the cake and start again.

If you can see the crumb coat through any ruffles you can go back and pipe another ruffle in between to cover it up.

Any there they are: 6 beautiful textures all piped with a piping bag and a petal tip with no turntable required!