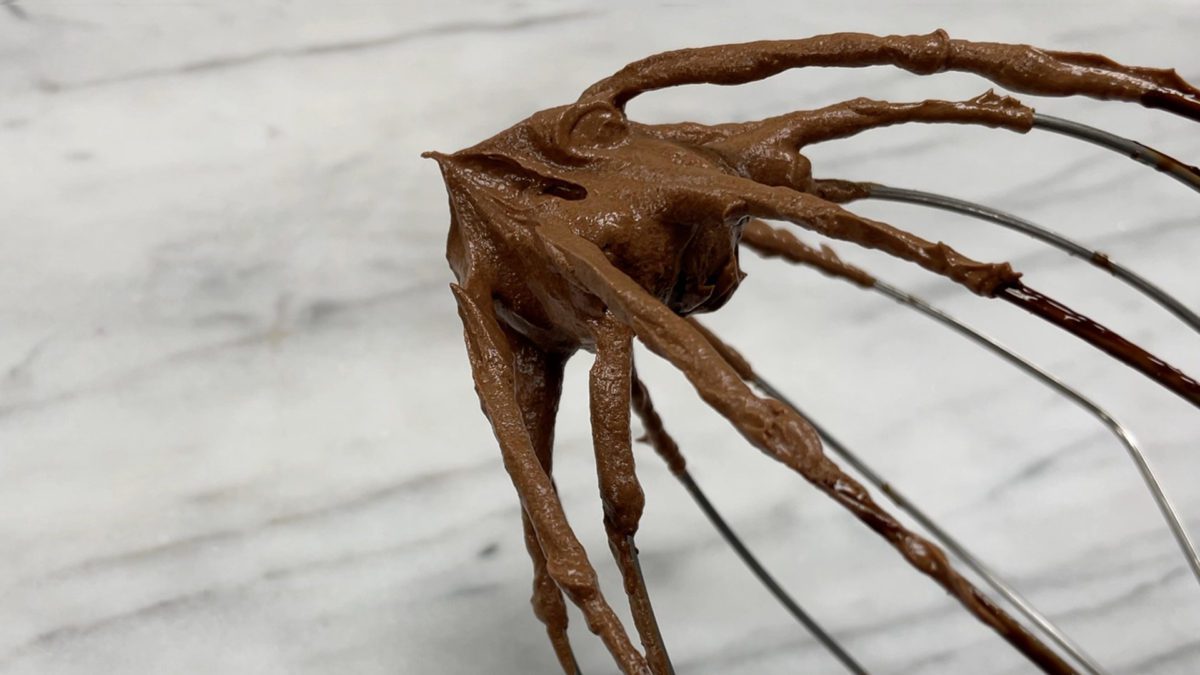 How To Frost A Cake With Chocolate Whipped Cream

Chocolate whipped cream is a decadent, not-too-sweet frosting that pairs perfectly with cake! It’s easy to make (and has just two ingredients), it’s stable enough to frost a cake, and it smooths really easily. If you prefer to watch a video of this tutorial, scroll to the bottom of the page.

I’m using semi-sweet chocolate chips but you can use a bar of chocolate instead, just chop it into roughly equal sized pieces. You’ll need about 200g of each to fill and frost a 4” cake or double that for a 6 inch cake.

Put the bowl in the fridge fo 30 minutes to let the chocolate cream cool and start to thicken. Grab a whisk attachment for your mixer and whip the chocolate cream until peaks form, which will only take a minute or two. Watch it carefully because if you over whip it it will become grainy.

The chocolate whipped cream is ready when you lift the whisk out of the bowl and it leaves defined peaks behind, which don’t flop over.

You can use this chocolate whipped cream as filling between the layers of a cake. It pairs wonderfully with my Perfect Chocolate Cake! Start by spreading a dollop on a plate or cake board and pressing your first layer of cake down onto it to attach it and hold it in place. Then spread chocolate whipped cream on top of each layer to assemble your cake.

To frost the cake I like to start at the top. Spread chocolate whipped cream over the top of the cake, going over the edges to prevent air pockets later. Spinning the cake on the turntable and hold an offset spatula at a slight angle to smooth the frosting on top of the cake.

Now spread the chocolate whipped cream over the sides of the cake, going all the way down to the cake board so there’s no exposed cake at the bottom. Spread it a little bit higher than the top of the cake so that you don’t have any gaps there and that will give you a nice sharp edge at the top of your cake later. It’s easiest to do this with cold cake layers so they don’t crumble or wobble around while you’re spreading.

If there are any gaps or indents in the frosting, or places where you can see the cake through it, spread on some more chocolate whipped cream and the scrape again with your frosting smoother.

Decorate the cake however you like and store it in the fridge until you’re ready to serve it. I teach how to use the same chocolate whipped cream to make this drip and the homemade donuts on my online cake school and for more cake ideas and inspiration, join my Club for access to ALL of the classes on my online cake school, both current and future classes, as well as exclusive members-only live demonstrations and Q&A sessions!