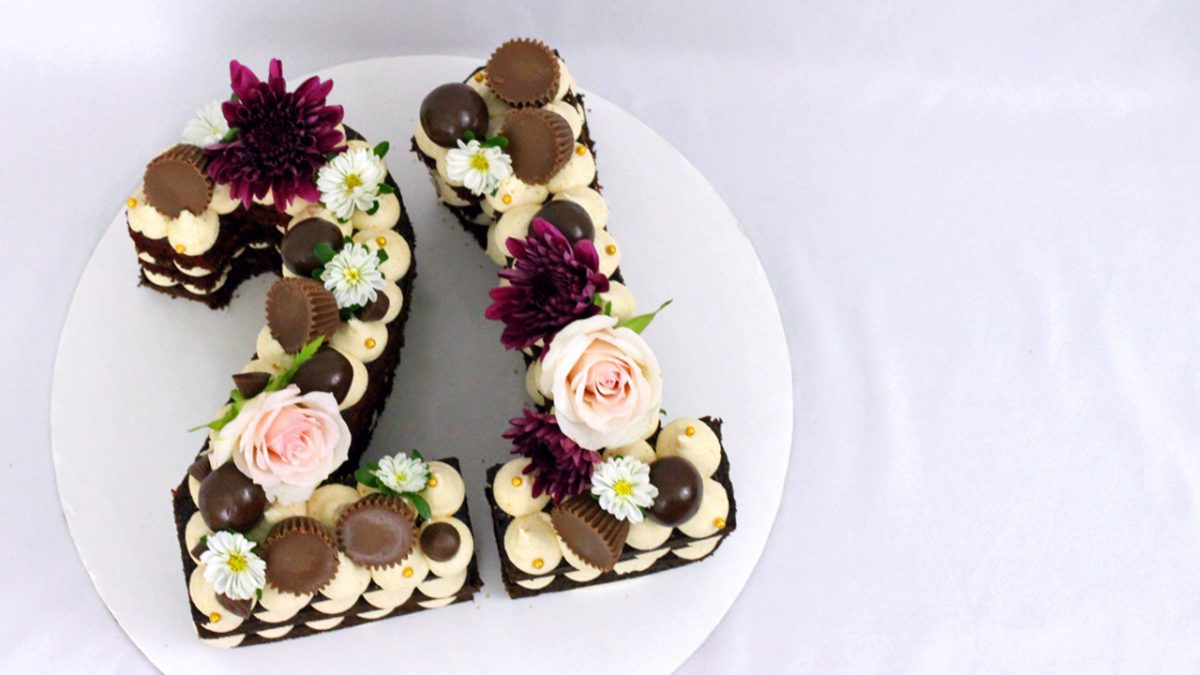 How To Make A Number Cake

Number cakes are very popular for birthdays but instead of the original version made with sugar cookies I’m going to show you how to use cake! If you prefer to watch this tutorial, scroll down to the bottom of the page.

I started with a batch of my Perfect Chocolate cake batter. For two layers of a quarter sheet cake, which makes two numbers of three layers each, I used enough batter for a six inch cake.

Line your baking pans with parchment paper and leave them on the parchment to give your numbers more support later in the process. After the cakes cool, chill them for thirty minutes in the freezer (still on the parchment) to make them easier to carve into numbers later.

While the cakes are chilling, prepare your buttercream. For two numbers for three layers each you’ll need about half a batch of my 4 Minute Buttercream. I used peanut butter buttercream by mixing a quarter of a cup of peanut butter into my buttercream. Add milk or cream until your frosting is smooth and easy to stir but still holds its shape.

Fill a piping bag with frosting. I’m using a round tip but you can play around with different star or open star tips for a different look.

Now sketch out your numbers. Use a piece of paper the size of your cake pan and fold it into three parts or however many numbers you’re going to cut out of your sheet cake. Then when you sketch your numbers within the folds of the paper, you know they’ll fit onto your cake.

Cut out your numbers and place them on a chilled cake, cutting around them with a serrated knife. Cold cakes are much less crumbly than room temperature cakes so they’re easier to cut neatly.

Don’t worry about how the top surface of your cake looks because it’s going to be covered with frosting soon.

For my cake, I baked 2 sheets cakes and I cut three numbers out of each sheet cake, so I had 6 numbers in total – three 2s and three 1s.

Arrange your first layer of each number on a cake board using a few dollops of frosting to secure them to the board.

Now use your piping bag to pipe little dollops of frosting on each number. It looks best if you align your dollops and rows but of course if your numbers curve like the top of my 2, you’ll need more dollops on the outer edge of the curve.

If your dollops aren’t forming nice clean peaks because the frosting is breaking off before the tip of the dollop, you’ll need to add more liquid to your frosting.

After piping your first layer of dollops, place the second layer of each number on top. I like to do this straight away, while the frosting is still fresh and sticky, but you have to be careful as you lower the cakes because if you have to adjust the position after lowering it, you’ll damage the dollops underneath.

Now pipe on another layer of dollops. Try to keep them all the same size. These dollops are going to be covered by cake so it won’t be very noticeable if they aren’t perfectly neat and even but it’s good practice for the final layer of dollops, which will be visible on top of the cake.

Place your final layers of cake on top. At this point you can tidy up your cake board by brushing away any crumbs using a pastry brush or wiping them off with a towel or paper towel.

Pipe on your final layer of dollops and then comes the fun part: decorating!

Straight after piping the final dollops, I sprinkled on some gold glitter and pressed every type of peanut butter chocolate I could find into the dollops, adding a few fresh flowers to make the cake more celebratory. It’s important to decorate immediately after piping the dollops, while the frosting is still sticky so the decorations are easy to place and they stick to the frosting.

Store your cake in an airtight container like a cake caddy. If you’re transporting it I recommend putting it in the freezer for about an hour first so it’s firm for the drive.

This cake is obviously perfect for a 21st birthday but also as a whimsical idea for someone older who would love to be 21 again! If you follow this tutorial to make a number cake or letter cake please tag @britishgirlbakes on social media so I can see your creation!

To watch the video version of this tutorial, click the play button below:

4 comments on “How To Make A Number Cake”