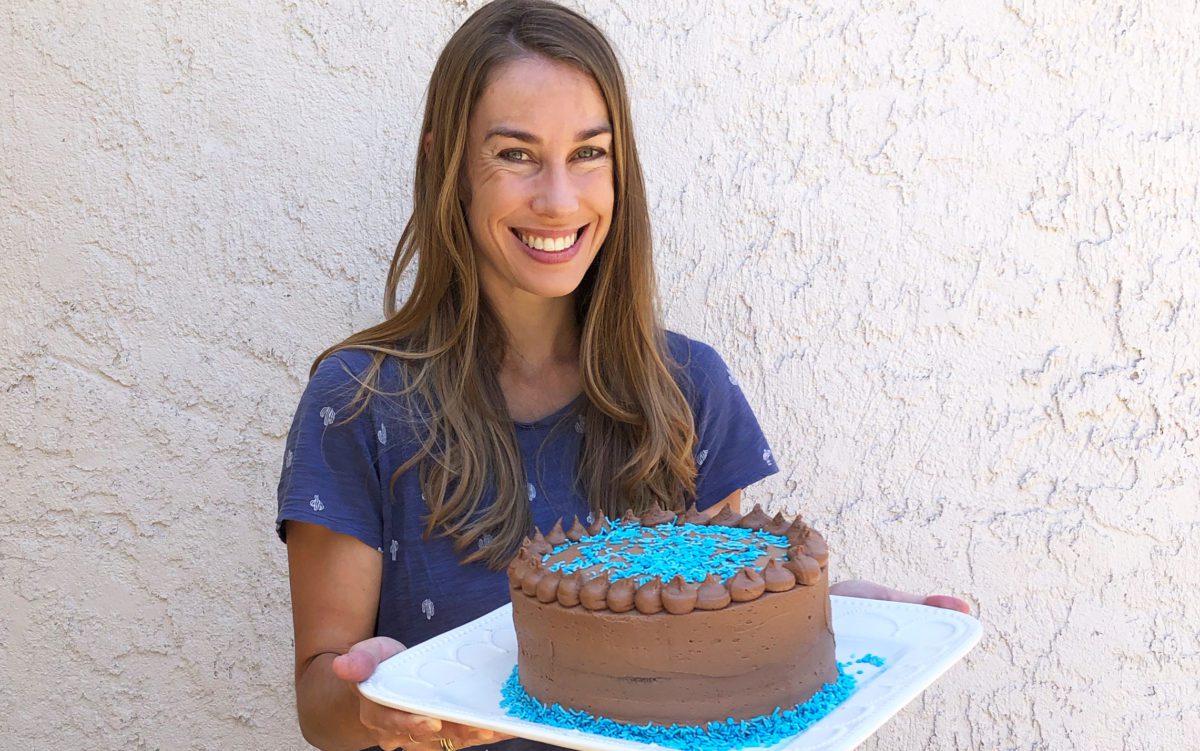 Cake Decorating without Tools AND a Turntable Hack!

If you don’t have cake decorating tools or you’re away from home, don’t let that stop you from making a pretty cake! In this tutorial I share how to decorate a cake with no special tools and a hack to create a makeshift turntable. If you prefer to watch a video of this tutorial, scroll to the bottom of the page.

For my cake I’m using my Perfect Chocolate Cake batter, dividing it equally between three 8″ pans. After baking and cooling the cake layers, chill them in the fridge for an hour or in the freezer for 30 minutes. Cold cake layers are much easier to work with because they’re firmer and less crumbly.

If you’re travelling somewhere with your cake layers to assemble and frost the cake there, check out my tutorial on How To Travel With A Cake In Your Suitcase!

When you’re ready to assemble your cake, take the cold cake layers out of the fridge or freezer and if you wrapped them in cling film or saran wrap, unwrap them now. Don’t worry about any imperfections on the cake surface because they’re all going to be covered with frosting!

Attach the first one to a plate or platter using a dollop of buttercream spread onto the middle of the plate. This will act as glue to secure the cake so it doesn’t slide around when you frost it.

Spoon some buttercream onto the first layer and spread it around to cover the cake, using the back of your spoon. Since the cakes are cold they shouldn’t crumble as you spread the buttercream.

Spread it right up to the edges to completely cover the top of the cake layer, so that the filling on top will eventually meeting the frosting on the sides and lock the moisture into the cake.

Place another layer of cake on top and continue alternating cake layers and filling. After placing your top cake layer onto the cake, spread buttercream over that as well. This will be the frosting on the top of the cake.

Move onto the sides next. This is a bit trickier because of the angle and also because the sides of the cake tend to have more crumbs than the top. It’s really important that the cake layers have been refrigerated so that they’re cold, because at room temperature cakes are even more crumbly.

Scoop up buttercream using the back of your spoon and then use that to spread it onto the cake.

By gliding your spoon from side to side like this, you’ll spread the frosting over the cake without pulling crumbs off. When you need to use your spoon to scoop up more buttercream, swipe the spoon off sideways instead of lifting it straight off the cake, which would pull cake crumbs off with it.

The more buttercream you spread onto the cake, the better, for two reasons. The first is that it’s easier to spread thick buttercream around on the cake, noise reduction and you can easily take some off with your spoon later. If you spread the buttercream on thinly, it’s more likely to pull crumbs off the cake.

The second reason for spreading the buttercream on thickly is that if you want to smooth the frosting, which I’ll show you how to do next, it’s much easier if the frosting starts out thick.

When you’ve spread frosting all the way around the cake, spin it around one more time to check for any areas where the frosting is much thinner or if there are any parts where you can see cake crumbs, and spread some more buttercream over those.

This textured frosting looks pretty as it is, so you can stop at this point if you like and tidy up the plate by wrapping a paper towel around your finger and then wiping around the base of the cake to take off any smudges of buttercream.

If you like you can add more texture to the top of the cake, like these waves or random swirls or scatter on some sprinkles.

If you want the frosting on the cake to be smooth, you can do that without any special cake decorating tools! I’ll show you the process step by step and also share an easy hack for a turntable. You can use any flat object for this, like a spatula, but the thinner the edge is, the better. Other objects that would work are the straight edge of a knife blade or a cake server.

Don’t worry about these strands of buttercream coming through the gaps in the spatula because they’ll come off later in the smoothing process. A spatula without these gaps would be even better to use but you’ve go to work with what you have!

To spin the cake more easily as you smooth the frosting, here’s an easy hack if you don’t have a turntable! Take the ring out of a microwave and place it on a non-slip mat or drawer liner so that it doesn’t slide around.

Place your cake plate or platter on top and although it won’t spin around effortlessly like it would on a cake decorating turntable, it will move much further and less shakily than if you tried to spin it on a bare table.

Scrape around the cake a few times with your spatula or whatever tool you’re using. Wipe your tool off on a towel or paper towel after each scrape so that you don’t drag buttercream back onto your smooth frosting.

If the cake is taller than your tool you’ll have to go around the bottom section once and then lift the tool an inch or two higher and go around again to smooth the top section.

If your tool doesn’t glide around the cake in a smooth motion, and instead it jerks or jumps or stops and starts along the scrape, you’ll get dents in the frosting at those points and you’ll have to scrape over that section again to get it smooth.

As you go, check to see if the cake is showing through the frosting anywhere and spread a bit more buttercream over those areas and then scrape again and again until you’re happy with the sides.

Remember to wipe the underside of the spatula clean after every scrape so that you don’t drag any dregs of buttercream onto your nice sharp edges.

When you finish smoothing the frosting, wrap your finger in a paper towel to wipe any buttercream smudges off the plate. Try not to touch the frosting on the sides of the cake but if you do, don’t worry because we’re going to cover up the bottom inch or so of the frosting.

After cleaning the plate, pour sprinkles around the cake and use your hand or the back of your spoon to press the sprinkles into the frosting. This makes a colorful border around the bottom of the cake.

To add some detail to the top of the cake, put some leftover buttercream into a ziplock bag and cut a corner off, which you’ll be squeezing the buttercream out of.

The line you cut across the corner should be about as wide as your thumb. If it’s much bigger or much smaller it will be difficult to pipe a neat dollop.

Hold the cut corner just above the cake, slightly in from the edge of the cake, and squeeze the buttercream out of the bag. It will bulge out to form a blob and then as you lift the bag up and away from the cake, release your pressure on the bag so that the buttercream makes a neat point.

These dollops of buttercream would be neater and more symmetrical if you used a piping bag and a round piping tip but this way works and you’ll hardly notice any imperfections when the cake is finished.

Add a few sprinkles to make the cake more festive and the cake is finished! No one will guess that this pretty cake was whipped up in just a few minutes, with no special tools!

You can store this cake at room temperature or in the fridge. If you refrigerate it, take it out of the fridge 2-4 hours before serving. This gives it enough time to come to room temperature (when it tastes best!) but it’s not so long that the frosting or decorations droop. When you serve the cake, wipe your knife clean after each cut for the neatest slices.

Of course, a delicious cake will be appreciated whatever it looks like, but I think cakes taste even more delicious when they look pretty, too! I’d love to see your cake decorating without tools and with this turntable hack – please tag @britishgirlbakes if you share any photos of those cakes on instagram so I can see your creations!

5 comments on “Cake Decorating without Tools AND a Turntable Hack!”